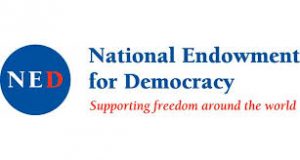 The National Endowment for Democracy (NED) is a private, nonprofit foundation dedicated to the growth and strengthening of democratic institutions around the world. Each year, NED makes more than 1,200 grants to support the projects of non-governmental groups abroad who are working for democratic goals in more than 90 countries.

Since its founding in 1983, the Endowment has remained on the leading edge of democratic struggles everywhere, while evolving into a multifaceted institution that is a hub of activity, resources and intellectual exchange for activists, practitioners and scholars of democracy the world over.

NED is a unique institution. The Endowment’s nongovernmental character gives it a flexibility that makes it possible to work in some of the world’s most difficult circumstances, and to respond quickly when there is an opportunity for political change. NED is dedicated to fostering the growth of a wide range of democratic institutions abroad, including political parties, trade unions, free markets and business organizations, as well as the many elements of a vibrant civil society that ensure human rights, an independent media, and the rule of law.

This well-rounded approach responds to the diverse aspects of democracy and has proved both practical and effective throughout NED’s history. Funded largely by the U.S. Congress, the support NED gives to groups abroad sends an important message of solidarity to many democrats who are working for freedom and human rights, often in obscurity and isolation.

The Endowment is guided by the belief that freedom is a universal human aspiration that can be realized through the development of democratic institutions, procedures, and values. Democracy cannot be achieved through a single election and need not be based upon the model of the United States or any other particular country. Rather, it evolves according to the needs and traditions of diverse political cultures. By supporting this process, the Endowment helps strengthen the bond between indigenous democratic movements abroad and the people of the United States — a bond based on a common commitment to representative government and freedom as a way of life.

From its beginning, NED has remained steadfastly bipartisan. Created jointly by Republicans and Democrats, NED is governed by a board balanced between both parties and enjoys Congressional support across the political spectrum. NED operates with a high degree of transparency and accountability reflecting our founders’ belief that democracy promotion overseas should be conducted openly.

We post information about all of our grants and activities on this Web site and are subject to multiple layers of oversight by the US Congress, the Department of State, and independent financial audit.