“The prestige economy of higher education journals: a quantitative approach”

This study addresses stratification in the global higher education research community and the changing geography of country affiliations in six elite journals. The distribution of country affiliations is analyzed from a longitudinal perspective (1996–2018), and full-time and part-authors in the field are contrasted. The prestige maximization model and principal-agent theory provide the theoretical framework for the study, which examines 6,334 articles published in six elite journals in the context of 21,442 articles in 41 core journals. The findings indicate that about 3.3% of academics have authored at least five articles (full-timers). These authors constitute the publishing core of the research community, while the 80% who have authored one article (part-timers) constitute its periphery. Higher Education (HE) and Studies in Higher Education (SHE) emerge as elite global journals, with an increasing share of non-Anglo-Saxon authors. Previously globally invisible countries became visible almost exclusively through HE and SHE. Global trends include the diminishing role of American researchers and the increasing role of researchers from Continental Europe, East Asia, and the cluster of 66 “other” countries. The single biggest affiliation loser is the US, which had 42.5% of country affiliations in 1996–2003 but only 26.9% in 2012–2018. This reflects both the increasing share of non-American affiliations and the increasing yearly volume of HE and SHE publications, in which US academics tend not to publish. 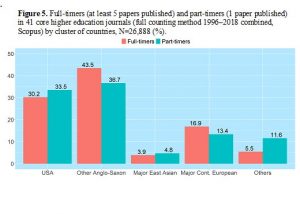 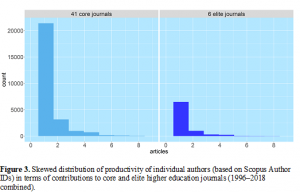 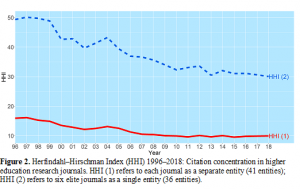 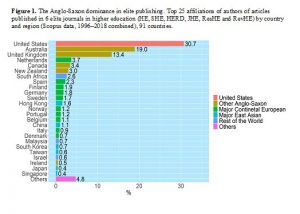 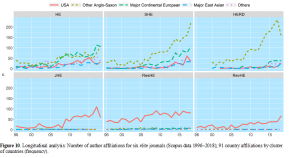 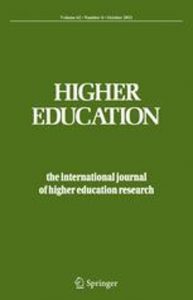 His three previous papers in “Higher Education” were published in: