Science and Public Policy is a leading international journal on public policies for science, technology and innovation. It covers all types of science and technology in both developed and developing countries.

The paper in PDF is here.

Or can be downloaded in PDF from ResearchGate here. 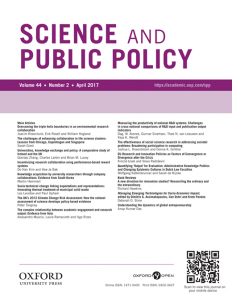 Abstract
This article examines highly paid academics—or top earners—employed across universities in tenEuropean countries based on large-scale international survey data regarding the academic profession. It examines the relationships between salaries and academic behaviors and productivity, as well as the predictors of becoming an academic top earner. While, in the Anglo-Saxon countries, the university research mission typically pays off at an individual level, in Continental Europe, it pays off only in combination with administrative and related duties. Seeking future financial rewards solely through research does not seem to be a viable strategy in Europe, but seeking satisfaction in research through solving research puzzles is also becoming difficult, with the growing emphasis on the ‘relevance’ and ‘applicability’ of fundable research. Thus, both the traditional ‘investment motivation’ and ‘consumption motivation’ to perform research decrease, creating severe policy implications. The primary data come from 8,466 usable cases.

Selected ideas from the paper are below:

This research examines an emergent class of highly paid academics—or top earners—employed across European universities. It differs from existing salary studies in its focus, sample, and method. It goes beyond previous work that has studied academic salaries either in single institutions (Katz 1973; Ferber 1974; Fox 1985), multiple institutions (Hamermesh et al. 1982; Konrad and Pfeffer 1990; Ward 2001) or national systems (mostly the USA, as in McLaughlin et al. (1979); Gomez-Mejia and Balkin (1992); Bellas (1993); Fairweather (1993); Barbezat and Hughes (2005); Fairweather (2005); Melguizo and Strober (2007)). Also, it explores  crossnational differences in salary patterns in ten European countries based on large-scale international survey data regarding the academic profession (N¼17,211). This research also goes beyond a more traditional approach, which examines the relationships between academic salary and its correlates through only bivariate correlational analyses, by using both logistic regression analyses and bivariate correlational analyses. This research examines the relationships between academic salaries and academic behaviors and productivity in a single institutional type, the European university, exploring one subcategory of academics: academics employed full-time and involved in both teaching and research. Finally, this article explores predictors of becoming an academic top earner from a comparative cross-national European perspective.

Economic models of academic salary determination have been predominantly based on the human capital theory (embedded in analyses of for-profit firms and treating higher education institutions accordingly); in the prestige model of salary determination, universities behave as both firms and nonprofit institutions, or ‘hybrids’ (Melguizo and Strober 2007: 634). In the prestige model, academic salaries are viewed as returns on the generation of prestige (for the individual academic, as well as the institution). Nonprofit higher education institutions act largely as ‘prestige maximizers’, just like for-profit companies act as ‘profit maximizers’: ‘not only are institutions seeking to maximize prestige, so are departments and faculty members’ (Melguizo and Strober 2007: 635). While human capital salary models focus on individuals’ research, teaching and public service productivity, a potential alternative model focuses on individuals’ prestige generation, mostly through publications, research grants, patents and awards, that is, productivity. Both the human capital model and the prestige model state that higher productivity (defined for different areas, with publications being at the forefront) should lead to higher academic incomes.

Prestige is largely a rival good, based on relative, rather than absolute, measurement, and accumulating prestige is a zero-sum game (Brewer et al. 2002: 30). Academia is becoming ever more competitive, and competitiveness is encouraged by deliberate government policies: ‘at the centre of all this is prestige, at all levels from the national system to the individual’ (Blackmore 2016: 1). Universities—as well as academics—compete in prestige markets. In particular, there is a strong link between individual and institutional prestige: ‘in maximizing their individual prestige, faculty members simultaneously maximize the prestige of their departments and institutions’ (Melguizo and Strober 2007: 635).

The maximization of prestige, in this theoretical framework, is strongly correlated with faculty salaries. Academics who help their institution to become prestigious are rewarded by the institution with higher salaries: more articles and books published in prestigious outlets, more prestigious research grants, more patents, etc. lead to higher institutional prestige, which consequently, albeit not directly, leads to higher individual salaries. That is, ‘the currency in which institutions are paid for faculty research is prestige. As a result, institutions provide financial rewards to scholarly output’, with faculty salaries being viewed as returns on the generation of  prestige (Melguizo and Strober 2007: 639).

Following the logic of this salary model, in the context of our research, highly productive academics should be disproportionately overrepresented among highly paid academics. Because more time spent on teaching means less time spent on research and vice versa, or there being only ‘research’ and ‘non-research’ time investments (Levin and Stephan 1991: 115), academics spending, on average, more time on research should be receiving higher average salaries. Spending more time on teaching, in turn, should have a negative or, at best, neutral effect on one’s salary (Katz 1973; Dillon and Marsh 1981; Konrad and Pfeffer 1990; Fairweather 1993). However, there is a difference between spending time on research, being research-focused, and being highly productive as compared with one’s peers: highly productive academics can also have more formal responsibilities as leaders, deans, heads of departments, etc. and still have coauthored publications with their post-docs or other early-stage researchers. The chance to have longer lists of coauthored publications may increase for selected academics with more institutional power, and institutional power increases with age and seniority (Stephan and Levin 1992).

This article is an empirically based comparative study of highly paid academics in Europe, and it uses a large dataset of behaviors, attitudes, and perceptions of the European academic profession (CAP/ EUROAC, N¼17,211). We have examined ten European systems, and our focus was restricted to full-time academics involved in both teaching and research who were employed in a specific institutional type: the university. A class of academic ‘top earners’ (from the age cohort of 40 years old and more having a minimum of 10 years of academic experience) was explored to explore various aspects of their working time distribution and research productivity. Finally, the predictors of becoming an academic top earner were examined from a cross-national European perspective. To a large extent, the findings obtained via a  multidimensional model approach support the findings of inferential statistics: interestingly, in the context of previous (mostly) single-nation studies, research time for the academic cohort studied is not positively correlated with high incomes, teaching time is not negatively correlated with high incomes, and there is almost no correlation between the research role orientation or gender and high incomes. Interestingly, the strong correlations between high productivity and high incomes seen in the bivariate analysis are not confirmed in the regression analysis. The research focus of this article was on high incomes in an older cohort of academics and the odds of receiving them, rather than—as in traditional academic salary studies—all academics and all academic incomes in general. Consequently, this research explores cross-national academic salaries via new questions (top earners, as contrasted with the rest of academics, and the predictors of being a top earner) applied to new (i.e. older) academic
cohorts in new (i.e. European) national settings.

This research project has two types of implications: implications for current theoretical models and assumptions in salary studies, as well as policy implications for institutions and national systems. Starting with the former, our findings tend to suggest that the traditionally explored link between higher time investments in research and higher academic incomes—consistently demonstrated for Anglo-Saxon countries over the last four decades (as in Katz (1973); Konrad and Pfeffer (1990); Fairweather (1993); Gomez-Mejia and Balkin (1992); Fairweather (2005); Melguizo and Strober (2007); and Gibson et al. (2014))—may not hold across Europe today as strongly as in Anglo-Saxon systems. As Fairweather (1993: 629) expressed, the traditional view is that ‘faculty who spend more time on research and who publish the most are paid more than their teaching-oriented colleagues’, and the American academe is moving toward ‘a single faculty reward structure, one dependent on publishing, spending time on research, and minimizing involvement in instruction’. National academic labor markets in Europe, as is clear from this research, are homogenous and research-based, rather than segmented (Fairweather 2005): teaching-oriented institutions do not seem to be paying their top teachers more, while all institutions tend to pay their top performers more. For European universities, academic pay does not seem to be influenced—as in labor economics (Toutkoushian and Paulsen 2016)—by the demand for higher education services or the supply of qualified individuals. According to our results, highly productive academics are disproportionately over-represented among highly paid academics across Europe: on average, 31.8 percent of top national research performers are among national top earners, with this percentage ranging from almost 80 percent in the UK to about 40 percent in Finland, Germany, and Portugal. The correlations between high incomes and high performance are strong.

Given that European higher education research stands in the shadow of its American counterpart, especially in terms of its basic theoretical frameworks, this article suggests a more sustained focus on cross-national (not to say cross-continental) differences in higher education and on the role of various national traditions in the academic enterprise in the future. We suggest rethinking the potential over-reliance on American research findings in discussing academic salaries in non-American contexts. Some theoretical frameworks and analytical concepts stand firm and are useful on both sides of the Atlantic, while others may not be as useful.