AMU has just been awarded 100 million USD (350 million PLN) for its succesful development plan 2020-2026 in the first edition of the Polish “Excellence Initiative”!

The winning project was prepared by a team composed of Prof. Ryszard Naskręcki, Marek Kwiek, Beata Mikołajczyk and Marek Nawrocki, with the support of the most important departments of the Adam Mickiewicz University administration. 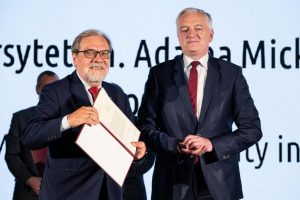 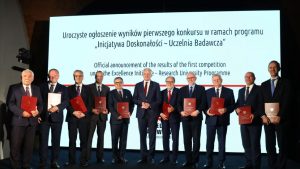 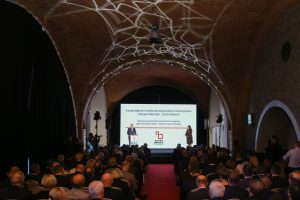 The 20 best universities in the country were qualified to take part in the first competition. All of them met the statutory requirements concerning scientific categories obtained during the last comprehensive evaluation of scientific entities in relation to the number of fields and disciplines in which the university conducts scientific activity. Moreover, none of the fields of study offered by the university could have had a negative opinion of the Polish Accreditation Committee. An international team of experts related to the science and higher education sector has selected 10 universities which in the future will become research universities and in the years 2020-2026 will receive a subsidy increased by 10%.

They were among them:

Each of the 20 universities was evaluated by 15 experts. Among them were people who served as rectors, presidents or vice-rectors of leading European universities, including the University of Göttingen, the University of Amsterdam, the University of Aarhus, the University of Manchester or the University of Southampton. Members of the team were also scientists who enjoy authority in the international scientific community. The selection of experts was made in such a way as to ensure the participation in the team of representatives of each field of science. The team chairman, Prof. Lauritz Holm-Nielsen, was a co-author of the Poland’s Higher Education and Science System report prepared in 2017 as part of the European Commission’s Horizon 2020 Policy Support Facility.

The evaluation was of an expert nature. In the evaluation of criteria concerning objectives and potential, additional indicators measuring the quality of scientific activity conducted by universities were taken into account. Apart from the assessment based on the content of the application, an international team of experts conducted interviews with representatives of all universities. The universities presented an action plan for the coming years. The implementation of this plan will be subject to evaluation. The first mid-term evaluation will be carried out in 2023 and the final evaluation in 2026. After this time, universities will have the possibility to extend their funding for the next years (2027-2032). However, not all of them. At least two higher education institutions, which will have a negative result or will be on the lowest ranking list after the evaluation, will not receive further funding. Universities or federations that will win another competition under the “Excellence Initiative – Research University” programme will be able to take up the vacant places. It will take place in 2026 and will be addressed to those academic centres which were not financed under the first competition.