Marek Kwiek became a member of the Editorial Board of “Higher Education Dynamics” (Springer). 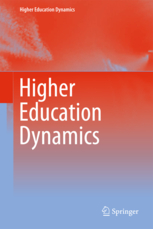