The book is here and the chapter (in PDF) is here. 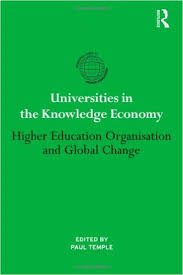 The article discusses an East/West divide in Europe in university knowledge production. It argues that the communist and post-communist legacies in the four major Central European economies studied (Poland, Hungary, the Czech Republic and the Slovak Republic) matter substantially for educational and research systems. The differences in university knowledge production may be bigger than expected, and the role of historical legacies may be more long term than generally assumed in both social sciences and public policy studies on the region. The gradual convergence of both higher education and research systems in two parts of Europe cannot be taken for granted without thoughtful changes in both university funding (both modes and levels) and governance. The article discusses links between knowledge production, economic competitiveness and regulatory and other environments in which both universities and knowledge-intensive companies operate. The role of factors other than higher education and innovation systems is substantially more important for competitiveness and growth in Central Europe than in affluent Western economies. The international visibility of universities as knowledge production centres is low and the analysis of the geography of knowledge production at the level of regions may indicate that Central Europe is in danger of being effectively cut off from the emergent European Research Area.