Marek Kwiek published a chapter „From Privatization (of the Expansion Era) to De-privatization (of the Contraction Era). A National Counter-Trend in a Global Context” in Sheila Slaughter and Barrett Jay Taylor (eds.), Higher Education, Stratification, and Workforce Development. Competitive advantage in Europe, the US and Canada. Dordrecht: Springer, 2016. 311-329 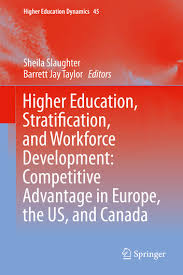